This class features choreography from "Anything Goes" and includes a special Q&A at the end where Kathleen will share her expertise and professional experince with you! 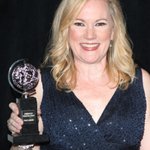