Routine by one of New Yorks Hottest Up and Coming New Choreographers Tislarm Bouie. Here is a sample of some of his work presented on Dance Teacher Web!

We offer over 700 videos, 100's of articles and lesson plans to help you stay fresh and current all year long. For the busy Dance Studio Owner, we offer fantastic articles on topics like marketing, how to get more student and increase revenue, business building seminars, sample ads and forms that will help you take your business to the next level. Think of us as your virtual Dance Teacher Conference. 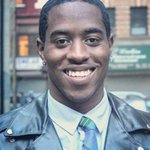