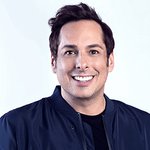 Ray Leeper is one of the most sought after choreographers and master teachers in the United States. Having a well-rounded background in Jazz, Ballet and Modern has led his work to be described as provocative, powerful, focused and innovative. Not to mention a direct quote by Ben Stein stating it as "American genius! American creativity! American stardom!" Ray's work spans the spectrum, from: Off Broadway to Music Videos, Recording Artists, Movies, Television, Industrials, Commercials, and Chorographical Showcases; he is known for his vision, drive and outgoing character. Ray's credits include working with numerous recording artists that encompass such names as: Elton John, Cher, Jamie Lynn Sigler, Geri Haliwell, Mai Karaki, Kelly Levesque, Queen Latifah, and Jihae. Ray also has a vast collection of commercial credits; to name a few: Pepsi, Sierra Mist, Hyundai, Saks, Levis, Northwest Airlines, Timberland, Planet Hollywood, Vision Street Ware and Pioneer Electronics. His work can be seen recurrently on television shows such as: All My Children, One Life to Live, Big Bang Theory, X-Factor UK, America's Got Talent and season 8 of So You Think You Can Dance.