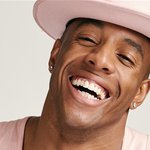 Jawkeen Howard is an up-and-coming American jazz-funk hip hop choreographer. He describes his style as a smooth, intricate, sexy, energetic, and melodic movement inspired by the late Bob Fosse. Jawkeen continues to teach and support his community but has spent most of his career in light of the industry. He has worked with artists such as Britney Spears, Demi Lovato , Kanye West, Jill Scott, The Killers, Josh Strickland and many others. Jawkeen has been mentored by, as well as assisted many big name choreographers such as multi-award winning Tabitha and Napoleon Dumo, Luam Keflezgy, and Tricia Miranda. Although recently achieving his life long dream of traveling the world in Michael Jacksons Immortal World Tour by Cirque du Soleil, his passion for dance has not allowed his aspirations to reach a limit. Jawkeen hopes to one day become a successful creative director so that his vision may be seen by the world. This fall he has been casted by Cirque Du Soleil in the Michael Jackson One show at Mandalay Bay in his hometown of Las Vegas. Jawkeen Howard is a game changer who looks forward to showing the entire entertainment industry what Las Vegas has to offer