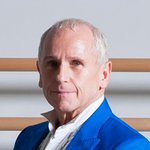 In 1966 Wayne Sleep joined the Royal Ballet Company. He soon became a Senior Principal Dancer and had numerous roles created for him by amongst others – Sir Frederick Ashton, Sir Kenneth MacMillan, Dame Ninette de Valois, Joe Layton, Rudolf Nureyev, and John Neumeier. Wayne was a Guest Artist with several ballet companies, including English National, London City, Scottish, Capab, and London Contemporary Dance. In 1980 Wayne formed his own dance company DASH, which after many seasons in the West End toured the world, concluding back in London at the Coliseum. The concept for DASH was to present dance to a wider audience using a mix of styles including ballet, jazz, tap and contemporary. This innovation at the time was well received by both critics and audience. As Ann Nugent said in Dance and Dancers: Wayne Sleep deserved a special prize for making dance more accessible with his brilliantly conceived DASH. Wayne has appeared on television as a dancer, guest and celebrity, on shows including Im a Celebrity Get Me Out Of Here, Celebrity Come Dine with Me, Four Royal Variety performances, This is your life, The Goodies, Parkinson and Wogan to name but a few. He has also appeared on both TV and radio as an actor. Wayne was a judge on ITVs dance show, Stepping Out in 2013. Most recently he appeared in Channel 4 series, Big Ballet