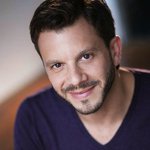 Nick Kenkel was just seen on Broadway as an original cast member in the first revival of EVITA, starring Ricky Martin. He’s also performed on Broadway in Catch Me If You Can, Legally Blonde, and The Wedding Singer. He’s worked on stage and video for numerous recording artists including Beyonce, Alicia Keys, Missy Elliott, Gwen Stefani, Madonna, Mariah Carey, Anastasia, Jamie Foxx, and Debbie Gibson. Nick has performed on screen in numerous programs such as MTV’s VMAs, E!’s Holly’s World and Ice Loves Coco, Rosie O’Donnell, Conan O’Brien, David Letterman, As The World Turns and has performed as a dancer on Saturday Night Live in over 40 episodes. As a choreographer, Nick was selected and featured in DanceBreak 2006, a prestigious NYC showcase profiling emerging theatre choreographers. Nick was the Associate Director and Co-Choreographer for PEEPSHOW starring Holly Madison, Mel B., and CoCo Austin. The show ran for a very successful four and a half years at the Planet Hollywood Resort and Casino. Receiving rave reviews by the Boston Globe, Nick directed and choreographed his own version of Legally Blonde at North Shore Music Theatre, one of New England’s finest regional theatres. On Broadway, Nick was the Asst. Choreographer on Legally Blonde and Assoc. Choreographer on Catch Me If You Can. Nick restaged and provided additional choreography for the first national tour of Catch Me If You Can