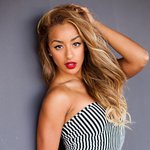 Aja DePaolo was born and raised in Connecticut. Her formative dance training began at age 6 at D'valda and Sirico Dance Centre in Fairfield, CT. She is a graduate from the University of the Arts, with a BFA in Dance Performance. Upon graduation in 2012, she moved to Los Angeles to pursue her professional dance career. Since her move she has completed a residency in Las Vegas performing in Cee Lo Green's, 'Loberace'. She has been seen on various TV shows such as ABC's 'Blackish', & NBC's 'The Goldberg's'. She was most recently seen touring with Selena Gomez in the 'Stars Dance World Tour', on NBC's 'The Voice' dancing with Meghan Trainor, and 'The Ellen Degeneres Show' performing with Pharrell. She is currently one of the lead dancers in the Britany Spears show in Las Vegas “Piece of Me”