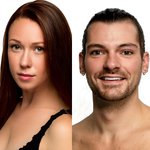 Krista Rae Montrone began her training at the age of three in Hudson, New Hampshire, at Melissa Hoffman Dance Center. After moving to Connecticut in 2000, she continued her training at D'valda & Sirico Dance and Music Centre. Upon graduating high school, Krista moved to New York City where she was involved in many projects including the opening of Revolution at the Joyce Theatre and various industrial projects ranging from Aflac to Juicy Couture. Krista joined Koresh Dance Company in 2011, and teaches for multiple schools in the Philadelphia area, and throughout the country. Joe Cotler grew up in Batavia, NY, and trained at his mother Robin Cotler’s dance studio, Images in Dance. He graduated from The University of the Arts in May 2009. While at school, he had the opportunity to work with numerous choreographers including Scott Jovovich, Ronen Koresh and Paul Selwyn-Norton. Joe joined Koresh Dance Company in 2009, and currently teaches and choreographs for numerous studios in the Philadelphia area, and throughout the country