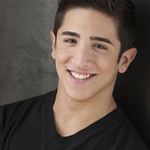 Jess has been singing and dancing since the age of five. He has done voice-overs for Verizon, Chex cereal and nationally for Pound Puppies. Jess has appeared on the Maury Povich Show, performed with comedian Jimmy Fallon for MTV’s Video Music Awards and made appearances on Law and Order: SVU and One Life to Live. His Off-Broadway credits include A Tree Grows in Brooklyn at City Centers Encores! and he has been on the national tours of The Radio City Christmas Spectacular and Broadway’s Leading Men. His Broadway credits include The Boy From Oz, How the Grinch Stole Christmas and Bye Bye Birdie. Most recently, Jess made the Top 8 of the hit TV show So You Think You Can Dance, Season 8 followed by the national tour for SYTYCD, where he was also named Dance Captain. Jess is now returning to Broadway as a cast member of Disney's NEWSIES.