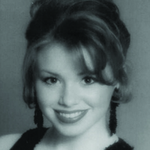 Jaclyn began studying dance at the tender age of two years old under the direction of Sandra Jemal at Long Island Academy of Dance Arts in New York. During her career as the lead dancer of the Long Island Dance Company she participated in numerous regional and national dance competitions. She was awarded the titles of "Miss Headliner", "Miss Footloose", "Miss Starpower", and "Miss Starquest". In addition, she received a ballet scholarship from Dance Educators of America and Access Broadway was named her management team. After graduating from high school, she was awarded a scholarship to attend CW Post Long Island University as a Dance Major, where she furthered her studies under the direction of Dr. Cara Gargano and quickly became a principle dancer in the Post Concert Dance Company. Jaclyn went on to perform as a magician's assistant and dancer in the Off-Broadway production of Peter Gabriel's Magic on Broadway. She was also chosen to dance as the "Ice Princess" in The Nutcracker on Broadway at Manhattan City Center. In addition, she was a finalist on Ed McMahon's "Next Big Star". Jaclyn returned to Long Island as a dance teacher and choreographer, where her students won numerous platinum and high score awards at many dance competitions.