You were just coming off an amazing period of progress in your life and career. Things couldn't have been better. You achieved more in the last few months than you achieved in the last three years. Being on a roll never felt so good. And then it hit! All of a sudden, seemingly out of no where...BAM!!! Things came to a grinding, screeching halt! It's as if all the gold that was flowing from the waterfall suddenly got cut off dry. The things you were really counting on happening in your life don't even seem close to seeing the light of day now. People are talking negatively about you and there's tension at work. Just getting out of bed to face the day is something you'd rather turn a cold shoulder to and stay in bed the rest of the day. Never mind the rest of the day...how about the rest of the week or maybe even the rest of the month? How could things have been so good for so long and then become so bad?

Have you ever found yourself in a situation similar to this? If so, how did you deal with what you were feeling at the time? Every one of us experiences great highs only to be thrown against the wall of seeming negativity from time to time. We're only human and riding the roller coaster that is life takes us to incredible highs and then drags us through some horrific and incredible lows. So how do we handle things when storm clouds seem to appear out of nowhere and threaten to totally rain on our parade?

1) Always be aware of the fact that stuff happens. That's a part of life!

2) Don't attach yourself to the emotion of what happened. If you don't become what the issues seem to be, they move on a heck of a lot faster

3) Realize that times might be not so great every so often. Know that behind every cloud lies a beautiful bright blue sun-filled sky

4) Realize that things happen for a reason, just don't tell your ego. Our mind-bodies love to draw things out and bathe in the thick soup of temporary issues that might appear to be negative. Did you notice the word "temporary"?

5) Life on earth ain't perfect. Take the ups with the downs

Consider the following; Could it be that what appears to be a negative issue or occurrence in your life right now is not permanent? It probably feels like the clouds will never clear but think ahead a number of months. Where will you be then? Do you still see the issue as being prevalent? What I'm getting at here is that there isn't much that can be done when bad things seem to happen to good people such as yourself. But when they do, acknowledge that it's happening and then muster all the energy, will and positive determination you have so that you can move on. In life there will always be bumps in the road. It's how we chose to react and deal with those bumps that makes all the difference. Some bumps will be major, some will be minor. The important thing to remember is that no matter what it is, you WILL get through it. Raging storms never last forever. They eventually blow over and the sun shines once again. Which one are you...the storm or the clear blue sky?

Setbacks will make themselves known to you from time to time. Don't make anything more of them than what they really are, an opportunity for you to show yourself that you are made of much greater stuff. Setbacks are not the solid walls they often appear to be. It's all in how you see it and even more important, it's all in how you deal with it. The choice is yours. 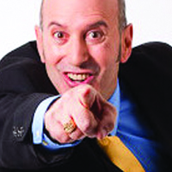 Motivational Speaker Robert Landau, has delivered over 3,200 Keynote Presentations in over 20 countries in his 15 year speaking career. Robert is also a results-oriented Certified Life Coach that works with individuals and businesses to help facilitate positive and lasting change. An accomplished Actor in New York City, then a celebrated international Cruise Director for 10 years with 300 ports of call on 400 cruises with major cruise lines, Robert also makes many appearances on radio and television broadcasts such as the world-wide HLN/CNN Cable News Networks. Robert is also the published author of three books. CONNECT Website - www.robertlandaumotivation.com Email - rlandau8@yahoo.com Facebook Page - https://www.facebook.com/RobertLandauSpeaker/